To view a video of the book launch with the Cronin’s, Matthew Richardson, Ben Crowe and author Maureen Hyland, visit: https://www.youtube.com/watch?v=1szr4gjX9Fc

The legacy of Coward Punch victim, Pat Cronin, has taken another important step to help educate young people in feeling empowered to ‘Be Wise’ and never use violence.

The Pat Cronin Foundation has launched three inspirational and touching story books written for primary school-aged children that it hopes will be shared with every young student in Australia. Each book includes teacher notes and classroom activities.

Matt Cronin, Pat’s father and founding director of the Pat Cronin Foundation, said it is very important that from the earliest possible age, children are taught and learn to understand that physical aggression is never okay and that that they need to think carefully and act kindly.

The three books are written by Maureen Hyland who taught at Pat’s primary school and was inspired by Pat in creating the characters, colours and commentary. They feature wonderfully expressive illustrations by educational illustrator, Bruce Rankin.

All profit from sales of the books will go to the Pat Cronin Foundation, which honours Pat by providing an optimistic voice to awareness, education and research about the Coward Punch.

Each book includes a story around Patch, a boy who goes to Searchers Road Primary School, starting with him in early primary, mid primary and upper primary. Teacher notes and activities that are age specific are included at the back of each book and via a website link.

The first book called The New Playground revolves around children desperately wanting to get into the new school playground and how one child makes a wrong choice in pushing a playmate off the slide because he wanted to be first.

The second book called The Four Square Challenge centres on children playing a ball game, which leads up to a challenge that takes an unexpected turn in the final practice game and leaves one girl learning an important lesson.

The third book called Footy Fever covers an important Aussie Rules football match in which Patch is captain of the Rockets and Maya is captain of the Sharks, both players in year 6. While everyone on the ground was well behaved, one player wanted to make a name for himself at all costs and soon learnt a valuable lesson about teamwork.

The story books form a critical part of the Foundation’s Be Wise Education program by introducing children to its important messages of ‘Be wise, think carefully and act kindly’.

“The books were specifically written to help reinforce that we all need to Be Wise when interacting with others and we need to think carefully before we act,” said Matt Cronin.

“The sooner children learn our Be Wise message then the sooner we will achieve our mission to ‘End the Coward Punch’. Cultural change starts at a young age.”

General manager of the Foundation, Geoff Smith, applauded Matt and Robyn Cronin who are determined that Pat’s life be honoured and that no other family should face the devastation of losing their son in such a senseless way.

“While we have an active secondary school program that informs students about Pat and his story, these story books are designed to reach out to primary school students to help them reflect on attitudes and behaviours around anger and aggression. The aim is for students to feel empowered to develop their own action plan to ‘Be Wise’ and to never use violence.”

The books can be purchased from patcroninfoundation.org.au and are priced at $20 each or $50 for the set of three. A 20 per cent discount applies for schools.

On Saturday the 16th of April 2016, 19-year-old Pat Cronin went out for a quiet night. He was punched from behind whilst assisting a mate. Pat was later taken to hospital and two days later his family made the agonising decision to turn off his life support system.

Quietly spoken and gentle natured but with a fierce determination, Pat was enormously popular and had a deep love for his family and friends. His death left a gaping hole in his family’s lives and caused devastation amongst not only family but also his friends and the broader communities in which the Cronin’s have been involved.

Matt and Robyn Cronin are determined that Pat’s life be honoured and that no other family should face the devastation we now face as a result of his senseless death.

Since the Foundation was established in 2016, it has raised more than $1 million with funds directly being used to help people feel empowered to make change through wise decisions. Visit: https://patcroninfoundation.org.au/

A boy with little spikes of blonde hair, eyes that sparkled with curiosity and the cheekiest of smiles—that’s the image of Pat that warms me; that breaks me; that inspires me. Pat was 5 years old when he started attending the school where I taught. I first met him in the playground, dressed in his blue and yellow uniform; this happy, caring, fun-filled little boy seemed ready to take every day of life in his stride—and he did.

While this story is fictional, I have drawn on my knowledge of Pat, his personality and his life, and included some features that reflect the young man being honoured in these books.

Throughout the series of books, I have used the name Patch for the main character as this was one of Pat’s nicknames. Another of Pat’s nicknames, bestowed upon him by his football coach, is Skipper. The owl in the story, a creation of Pat’s, has been honoured with the same nickname. The colours of the school and football uniforms were worn by Pat.

Every word in these books is dedicated primarily to Pat, but also to his parents Matt and Robyn, his sister Emma and brother Lucas who have vowed to ensure Pat will always be remembered. Inspired by a beautiful image every day—what a privilege this has been for me.

To view a video of the launch visit: https://www.youtube.com/watch?v=1szr4gjX9Fc 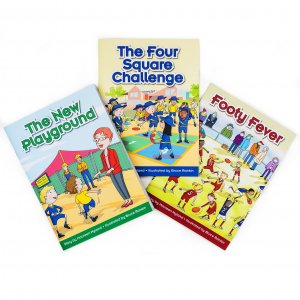 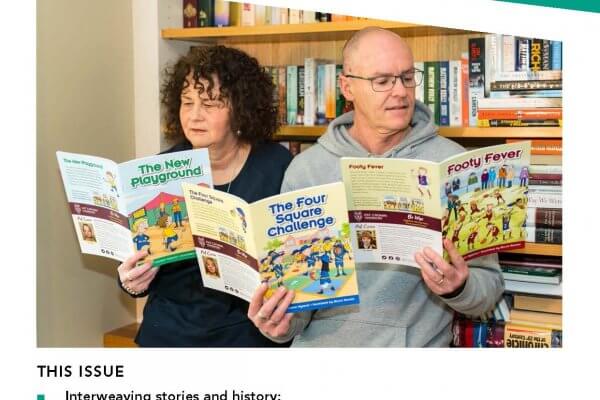