The true story of Ukrainian Andrii Antonenko and his miraculous survival

Reading Nobody’s Soldier about the life of Ukrainian Andrii Antonenko is a privilege and is hard to put down.

This true story starts when Andrii was just seven and his family was forced off their 27-acre farm and transported to a labour camp in the Arctic Circle as part of the Stalinist regime’s bid to confiscate farms and turn them into collectives.

This was just after Andrii’s father was taken away by the communists and beaten by the political police, returning home bloodied and beaten after refusing to give in to their demands of giving up his land to the state.

Andrii’s fascinating life story was told to his son Peter, as spoken through his mother and transcribed from audio tape to the written word.

“The idea of putting the story into some form of a memoir was as a result of many fishing trips where dad would tell me snippets of his life and philosophies born out of his life experiences,” said Peter Antonenko.

“I found the stories fascinating and wondered how anyone could be so kind, insightful, gentle and thoughtful after the many horrific events, trials and tribulations he had experienced.”

The word ‘escape’ is one that pops up frequently in the book as Andrii continually manages to extricate himself from incarceration and capture by the Russians on numerous occasions, the Germans more than once, and even the British who kept wanting to send him back to occupied territory.

That’s one of the reason’s Nobody’s Soldier is a page-turner. It’s hard to believe that one person could go through so much, firstly at such a young age, and then later on, when he almost died on several occasions. 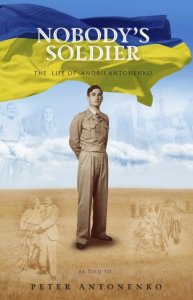 Survival thanks to inner strength, ingenuity and luck

Andrii’s recollections are vivid and you can imagine being next to him, following him as he tries to survive: the freezing weather; being shot; the constant threat of starvation; a torpedo; being beaten and attacked; and finally, tuberculosis (TB).

Born in 1922, Andrii had six siblings and was caught up in Joseph Stalin’s communist rule of the Ukraine and conscripted into the Red Army in 1941, just prior to the German invasion of Russia in World War II.

Throughout his life until he found freedom in England, Andrii had a strong desire to maintain a relationship with his separated family members.

Hiding from seen and unseen enemies was a priority so travelling on foot was a preference and didn’t require money. One journey involved Andrii and a friend travelling 1800 kilometres; 150 kilometres from Russia to the Ukrainian border and then almost all the way across Ukraine. It took six weeks for him to be reunited with his family.

While always living in constant fear, Andrii never gave up and overcame extraordinary obstacles with his strong will, gentle personality and unquenchable love for his country. He was a strong believer in destiny and fate and felt that it was not his time to die.

Ultimately, through luck and deception, he managed to pass himself off as a Pole and join the Polish division of the British Army in order to escape being repatriated by the by the Soviets and sent back to be murdered as part of their cleansing process.

While being treated for TB in England, Andrii met his future wife who was in the British Army defusing bombs and hand grenades. In 1959 they and their two sons emigrated to Australia as ten-pound poms.

It is a happy ending from a very humble and brave man, Andrii Antonenko, who died in 2005. His wife Kathleen died in 2016.

Nobody’s Soldier is published by Sid Harta and available at all good bookstores with an RRP of $24.95. It is 269 pages and includes many photos of Andrii and his family. All proceeds from the sale of the book will go towards a foundation/bursary scholarship in Andrii’s name to assist young pilots or students interested in aviation/aerospace human factors as a way of promoting safety.

“It is hard to believe that any one person could have endured so much trauma and survived, but survive he did, long enough for one of his sons to tell his amazing story,” Valerie J. Griffiths

“Andrii’s story fills me with hope and amazement at the hardship people will endure to find and live a peaceful and full life,” John Morrow’s Pick of the Week

“This book is a must for anyone interested in the human impact of Stalinism and the Second World War in Ukraine and its aftermath,” Keith Gregory, author of Gaunasala Ni Bula

“The first-hand account about Andrii Antonenko is an amazing and incredible story that I will never forget. The book is one of those that is hard to put down as the accounts of hardship to himself, his family and the Ukraine community over those tough years, helped me understand a little of what life was like for these amazing people in those years of hell. Nobody’s Soldier is a must read,” John Holmes, Croydon, Victoria

Issued on behalf of Peter Antonenko by WMC Public Relations Pty Limited. Contact Wendy McWilliams on (03) 9803 2588. If you would like to interview Peter or would like high res photos please contact Wendy McWilliams at WMC PR or send an email via here. Photos are taken at the book launch on 25 September 2019. With Peter is Orysia Stefyn, Chair of Ukrainian Education Council of Australia.

Wendy McWilliams
Previous post Social proof: how to obtain reviews so you can sell more Next post 5 ways to NOT lose your licence this Spring Racing Carnival

Fake news can harm your reputation