The first step in learning to read and write effectively is to develop awareness of the 43 sounds (phonemes) that form Australian spoken English.

The Australian National Curriculum strongly recommends that all Australian primary schools include phonemic awareness and synthetic phonics in their literacy program.

A familiar name in the primary school classroom, Barbara Murray is co-author of Sound Waves, a whole-school phonemic approach to literacy that is widely used in schools throughout Australia and in some countries overseas.

Barbara Murray’s new series, Sound Stories, is perfect for parents and grandparents to introduce the sounds to early childhood aged children and, importantly, as a teacher’s resource in schools and early childhood centres. This set of books is unique in that it provides a story for every sound of Australian spoken English in the one set of books.

Through stunningly detailed illustrations from Sarah Hardy, and clever and engaging stories from former teacher and expert wordsmith, Barbara Murray, children will have a joyful introduction to developing phonemic awareness, the precursor to synthetic phonics.

While these terms may seem daunting, Sound Stories simply and beautifully takes young children on an imaginative journey to help them learn the 43 individual sounds that form Australian spoken English.

For example, the newly completed fourth book in the set, Bertie Bird and the Earthworm and other stories, introduces new readers and writers to nine of the 19 vowel sounds often represented by the letters: ir, or, oo (two different sounds), ou, oy, eer, air and er.

The /eer/ sound is introduced in a story called Tameer Nearly Disappears and follows the baby reindeer Tameer who disappears into icy water, only to be rescued by her fierce and fearless reindeer father. Words in the story and illustrations that promote the /eer/ sound include Tameer, reindeer, nearly, disappears, fearless, fierce, tearful, clear and cheer.

A former primary school teacher, Barbara Murray wrote Sound Waves, a Whole School Phonemic Approach to Reading and Spelling from 2000 to 2006. She is currently involved in creating the fourth edition. Teaching was her passion and a phonemic approach featured daily in all her classes across the whole primary school. She loved developing a curiosity about language in her students.

“Synthetic phonics involves segmenting spoken words into individual sounds. These vital skills, combined with a knowledge of the alphabet code, allow representation of the 43 sounds in written form.

“I designed each ‘Sound Story’ so that delightful, engaging illustrations will entice children to observe, imagine, predict, draw conclusions and create a possible storyline as part of an open discussion with others present, before the story is read to them.

“Discussion about the words that name and describe items and actions in the illustrations and the common sound heard in these words, follows,” she added.

The four books in the set are:

Book 1: An Introduction to Consonant Sounds, Part 1. The Bolton Boys’ Balloon Adventure and other stories

Book 2: An Introduction to Consonant Sounds, Part 2. Robbie Robot to the Rescue and other stories

Book 3: An Introduction to Vowel Sounds, Part 1. Anna Ant’s Antics and other stories

Book 4: An Introduction to Vowel Sounds, Part 2. Bertie Bird and the Earthworm and other stories

Each set of four books comes with a colourful box for easy storage and safe-keeping.

The books have an RRP of $24.99 and can be purchased from all good bookstores and at //www.barbaramurray-author.com.au/

Schools and libraries receive a 20% discount off the RRP when purchased through Barbara Murray’s secure website, with a boxed set available for $80 plus $10 postage. Schools can also request a free digital download of the stories for projection on an electronic whiteboard.

The Sound Stories books are published by Little Steps Publishing and distributed by Woodslane.

Barbara Murray is the co-author of award-winning Sound Waves phonemic spelling resources, which are used throughout Australia’s primary schools and overseas. In 2017 Sound Waves was crowned the Best in Literacy at the Educational Publishing Awards winning Best Primary Student Resource – English. Following this success, Barbara self-published Sound Stories, a boxed set of four picture books that contain 43 stories to introduce the 43 sounds that form our spoken words. Barbara grew up in Rockhampton, QLD and had a teaching career that spanned three decades, teaching at all year levels in various Queensland private and state schools. With her husband, Barbara then moved to Perth, where she currently lives. She has two children and four grandchildren.

Issued on behalf of Barbara Murray by WMC Public Relations Pty Limited. To enquire about these books, please use this contact form. //wmcpr.com.au/contact/ 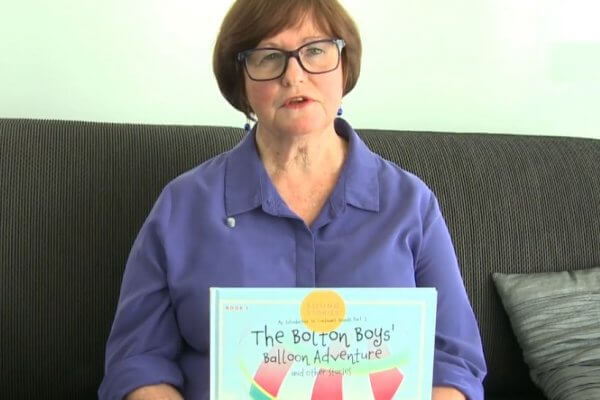 Question to Australian universities about teaching the teachers