Humorous guide on failure reveals true nature of how to succeed

New tongue-in-cheek book, How to fail fantastically, says failure is a critical step to success

Everyone in the world has failed at something at some point in their lives.

To many, failure is a daily occurrence. To help them and everyone who fears failure, a new self-help guide has been published that is aimed at getting people to talk and open up about the topic.

The new, tongue-in-cheek book is called ‘How to fail fantastically’ written by serial failure-ist, Ken Williams, who says you shouldn’t fear failure, but embrace it.

Through the companion guide, Williams shows that with a sense of humour and sense of purpose, anyone can fail fantastically. In fact, his aim is to demonstrate that failure is a precursor to success. True success.

Peppered with amusing illustrations and quotations throughout, the guide offers 11 steps to failure (well, step 6 is a bit dodgy, and 8 is a tad lazy while step 4 is a doozy!) that reveal the true value of failure.

“There shouldn’t be any fear in failure,” says Williams, “because it promotes a strength of character and confidence. Failure is under-valued in society. It’s not the big, bad monster but offers us many great lessons.”

He says you can’t afford NOT to fail and that failure is a critical step to success.

“If you don’t know how to fail, you’ll never be successful.”

Failures for Williams began at an early age where he was the class clown and left school at 15. Over the past 35 years he has chased a life that he is not sure exists.

He has had myriad jobs and careers including a pirate, a brewery worker, a chef, a motel manager, a children’s entertainer, a nutritionist, a sales rep and a copywriter. He has created and run several of his own businesses in numerous industries all with varying degrees of success.

None of them lasted the distance, a situation for which Williams takes full ownership. “I either made the wrong calls, lost interest, did things half-arsed and got all my business expertise from all the wrong people. But I’m still here, ready to go again. I love life and I wouldn’t change a thing. There are so many great character-building lessons to learn from failure.”

Ken Williams is also the author of The sound of Crickets – my life as a comedian and How to get your Book Rejected.

How to fail fantastically is available from leading bookstores (distributed by Woodslane) and has an RRP of $19.95. For more information visit www.kenwilliamswriting.com.au

Ken Williams has worked in sales and marketing for more than 20 years, from direct selling to writing ad copy for Australia’s leading newspapers. He is the founder of the blog and podcast, Reading with a chance of tacos. Ken’s own writing has been published in popular magazines, daily newspapers, online publications, children’s books and the corporate sector. Ken and failure go way back. Failure has got Ken through life. He’s failed at just about everything he’s ever done (at least in some way), but he’s still smiling and quite often, he even laughs. 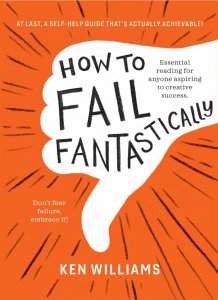 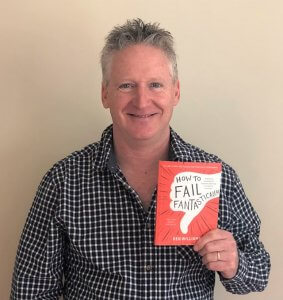