Highlights of 2014 to educate and entertain 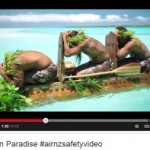 This month’s PR newsletter is a bit different. We are pleased to share with you interesting and useful content to help with your planning for 2015. We look at the 15 best business books of 2014; the best and worst brands on social media in 2014; fascinating social media and marketing stats; and which ads had the most YouTube hits (the image here is from the Safety in Paradise video by Air New Zealand #airnzsafetyvideo which is excellent).

First we kick off with the 15 best business books of 2014 as suggested by Business Insider.

Whether you’re looking for the last-minute gift or to make sure you have a good read over the holidays, there were plenty of blockbuster business books in 2014 that will not only educate, but entertain. This list includes:

* The Virgin Way: Everything I Know About Leadership by Richard Branson
* Zero to One: Notes on Startups, or How to Build the Future by Peter Thiel
* #GIRLBOSS by Sophia Amoruso
* Overwhelmed: Work, Love, and Play When No One Has the Time by Brigid Schulte

Next, Tania Dua reports for DIGIDAY on the best and worst brands on social media in 2014.

The best and worst brands on social media in 2014

A new study by Sprinklr, a social media management firm, has measured social media performances of over 35,000 brands using 11 different metrics on over a dozen social networks. Sprinklr has identified the brands that have both most and least improved their performances on social media in 2014.

There are some revealing stats here by Tom Pick from KC Associates:

* Nearly half (46%) of people say a website’s design is their number one criterion for determining the credibility of a company.

* 75% of smartphone owners watch videos on their phones; 26% at least once per day.

And finally, I look at hits in the ad world:

Which ads have had the most YouTube hits in 2014 so far?

On AdNews, Olly Grundy has compiled a top ten of Australian adverts by numbers on YouTube. He said that advertisers today are exploring the potential of digital to tell brand stories online.