One of the inspirations for Dr Valerie Britton-Wilson’s latest book was a bundle of wartime love letters from her father to her mother, sent to then Bombay from the jungles of Burma.

A Touch of India not only explores this romance and end-of-Empire India, it provides observations about life in contemporary India. There are fascinating moments from the author’s and her mother’s lives, each of them confronting the ups and downs of India as successful independent Anglo-Indian women, yet decades apart.

As a Melbourne author and social researcher, A Touch of India: Chutney Mary, Charming Irregularities and an Unlikely Romance, is Dr Britton-Wilson’s fourth book, having previously published three non-fiction works including The Secret Life of Money and New Faces of Leadership.

The 300-page memoir includes more than 85 historic and family photographs including the author’s great grandfather who was a Lt Colonel in the British Army (and grandson of a knighted Director of the East India Company) and her great grandmother, a French vicomtesse. They moved to India in the mid-nineteenth century to set up a tea plantation.

Writer of the love letters, Valerie’s father, Donald Britton, was an English concert pianist turned commando officer who fought in Burma in the famous Chindit brigades during WW2. After the war he married the author’s mother, Pearl Creed, a journalist, writing and illustrating her own weekly column in the Times of India, then one of the largest circulating newspapers in the world. Donald became the Director of Music at Melbourne Grammar and later, working in Queensland, received an OAM for his services to music.

As the history unfolds, the author shares the stories that Pearl wrote to pass on to her children. One of these related to the White Australia Policy and an official from Australia House who visited the Britton family in England to check on their ‘whiteness’.

The book dissects what it means to be a ‘Chutney Mary’, influenced by skin colour, race, caste and social position, issues that have relevance outside India, such as in multicultural Australia. It also provides a wealth of observation, knowledge and insight: from horrendous accounts of the 1947 partition, to a dowry murder, to chronic corruption. 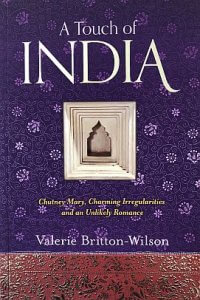 Intertwined with vivid pieces about episodes in Pearl’s life, are her daughter’s own experiences in contemporary India. For two decades, Valerie Britton-Wilson and her friend Sue McFall would visit India at least once a year.

“We established a textile and clothing business to justify our trips and we’d explore a new part of India on each visit,” she said.

“The range included limited-edition women’s fashion clothing, bedlinen and accessories that we would sell in an annual ‘pop-up’ shop, a term that hadn’t even been coined when we started.

“This business venture spawned the book’s subtitle ‘charming irregularities’. Both the charm and kindness of people we encountered, as well as the challenges of dealing with unfamiliar customs and business practices.

“For people who have been to India, it will revive memories of its colour, flavours and smells. For armchair travellers who are fascinated by India, A Touch of India is a wonderful introduction,” Valerie Britton-Wilson added.

The charms and challenges of modern India are many, encapsulated in this biographic memoir that is a potpourri of travelogue, genealogy, socio-political commentary and Indian cuisine: always informative, sometimes funny and often poignant.

A Touch of India is published by Bloomings Books and distributed by Thames & Hudson. It has an RRP of $32.99 and is available in all good bookstores and can also be purchased directly via the book’s website.

Melbourne writer Valerie Britton-Wilson was born in Cambridge, UK. Her parents moved their young family to Australia in 1954. Valerie has an MA in political sociology and a PhD in social psychology, both from The University of Melbourne. She has written three previous non-fiction works, including The Secret Life of Money and New Faces of Leadership.

Valerie is a social and political researcher, specialising in depth interviews and focus groups. She has also worked in research and production for ABC TV education and SBS TV interview programs. She has served on the boards of two leading schools. Valerie is married and has three children and three grandchildren.

A Touch of India summary

In A Touch of India, Valerie Britton-Wilson discovers the challenges and charms of modern India whilst uncovering the life of her mother Pearl, a young Anglo-Indian woman growing up in end-of-Empire Bombay. Pearl was a journalist with the Times of India in the 1940s who unexpectedly fell in love with a brilliant Cambridge pianist on leave from fighting the Japanese in the jungles of Burma. The author soon finds herself falling in love with India, which resulted in her launching a textile and clothing business.

Pearl’s descriptions, and the discovery of touching love letters, are interwoven with the author’s experiences over two decades of working in this sometimes difficult but always fascinating country. There is a search for an elusive ancestor, a tragic dowry murder and insights into being a Chutney Mary (of mixed blood). A touch of history, a touch of travel, a touch of textiles, of humorous and touching anecdotes and much more….

A wide selection of high-res images available, including: 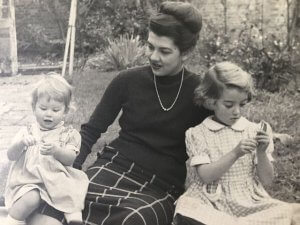 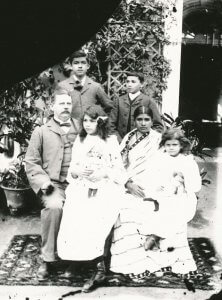 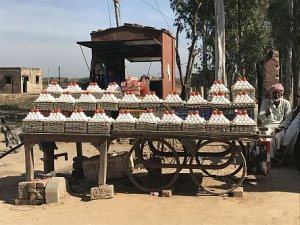 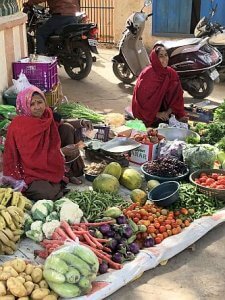